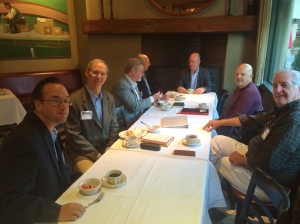 Who knew!  That seemed to be the theme of Robert Verhoeff’s presentation and story presented to the CEO Club of Marin on Tuesday, October 13, 2015.  We started by trying to guess what business he purchased and has run for the last 20+ years, in the style of “WHAT’S MY LINE!”  If Charles Daly was still MC’ing the show, then he would have halted us as it took more than 10 turns to identify Robert’s business as a chain of Pawn Shops around the Northern Bay Area.

In reality, we could have called his business a Consumer Lender, due to the strict compliance, rules, and regulations they face in their lending business.  Or a Retailer, based on the significance of the retail side of their business, both new and used items.  Or a Distributor, as they travel the country sourcing merchandise from Wholesalers to keep their stores supplied with high-demand items.  Or a Valuations Business, based on the volume of property and equipment valuations they do across their eight stores. Their employees have many credentials in valuation, supported by a heavy investment in tools and technology to distinguish rare gems and watches from impostors.

Robert shared with us the common misconceptions he learned and faces still today from people who don’t understand his business.  Robert continually works to educate the buyer, seller, borrower, and legislator about his industry to support its growth and protect its future.  A little-understood industry!

Robert began his career as a CPA in public accounting, worked his way into financial management for a sophisticated technology manufacturer, and then was presented the opportunity to buy into a chain of Pawn Shops with whom he became familiar as a client back in his auditing days.  He took a risk, bought in, and slowly worked to take over the enterprise from the founder.  He then expanded, doubling the number of stores, before pulling back during the last financial recession, to run a more lean and profitable enterprise.

Some interesting facts about his business:

Thank you, Robert, for a fun, provocative, and educational presentation!